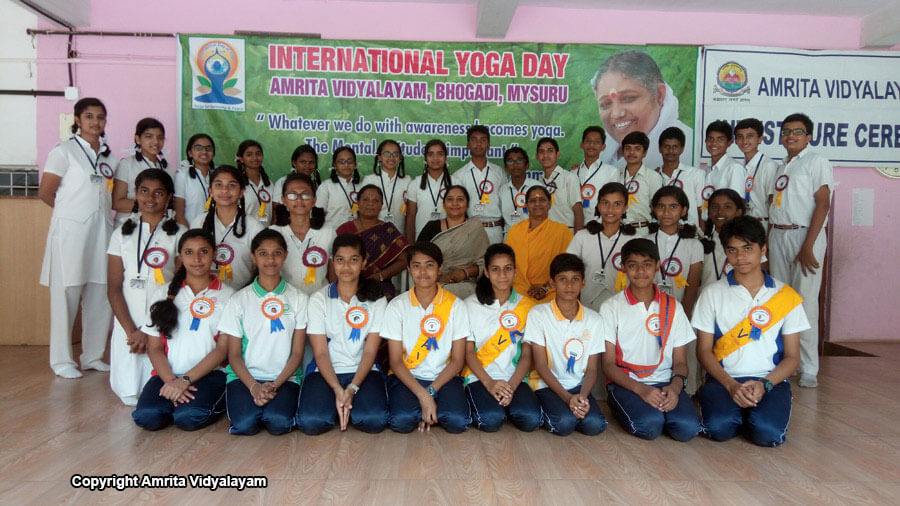 Students of Amrita Vidyalayam, Mysuru had their new student Parliament installed on June 23, 2017 during the Investiture ceremony held at the school. International Yoga Day was also celebrated on this occasion.

Deeksha P. of Class 10 welcomed the gathering and Ananya R. Bhat of Class 10 compered the programme. Santhosh Bharadwaj of Class 10 proposed the Vote of Thanks.

The chosen members of the school parliament took their oaths. The chief guest in her speech called on the newly formed council of ministers to abide by the words uttered in the oath and to execute their duties sincerely.

The Chief Guest stressed the importance of Yogasanas and Pranayama. She said that the West is now looking at India in wonder and imitating our culture, and that through Yoga Day celebrations, India is propagating physical and mental health worldwide. She also stressed the importance of breath control and concentration which improve through Yoga and Pranayama. The alignment of the body, mind and soul improves one’s personality, she said. She called upon students to practice yoga and meditation every day in order to lead a healthy, intellectual and harmonious life. Following her speech, students of our high school section displayed various yogasanas.